Quick program note: Shodan has become Nidan (pronounced knee-don, with the accent on the first syllable).

You have probably guessed that is not my son’s real first name. I originally christened him Shodan because he is an exceptional martial artist, having learned the Cordone-Ryu system, which is similar to Shorin-Ryu for those of you in the know, under the tutelage of Grandmaster Nicholas Cordone for over ten years. In March of 2017, he achieved his first degree black belt, known as Shodan, and two weeks ago he was promoted to second degree, known as Nidan. Therefore his pseudonym has changed as well, and will continue to evolve as he climbs the martial artist ranks.

Nidan loves nature, and is a rock-hound.  He’s become quite adept at searching for and finding interesting rocks of all kinds, but is currently on the hunt for quartz and flint. Hurd State Park is within twenty minutes of our house, and has been his go-to place for rock exploration. He’s waxed poetic about the peaceful w

oods and trails he navigates in his pursuit, and it sounded like an interesting place, so I asked if he’d mind if I tagged along during an excursion last weekend. Nidan loved the idea, and away we went.

Truthfully, I didn’t expect to do much. I was familiar with the area and knew the trails were definitely not flat. I figured I’d tag along for a little while, then retreat to the comfort of our vehicle while Nidan continued his exploration. As we were leaving the vehicle, I realized that I left Zorro at home, and thought my plans were about to go up in smoke before I took one step. After all, without my trusty cane, there was no way I was going to attempt to navigatge those trails.

Nidan saw my dilemma, and wasn’t about to let me back out at this stage of the game. So he searched for less than a minute and discovered tree branch that had fallen to the ground that would serve as a walking stick. It was sturdy and straight, so with stick in hand, I followed Nidan to a point in the road that was about a quarter mile from where we parked, and followed him onto a downhill path at the entrance to one of the park’s trails. The first two hundred yards was partially paved, as if it was an overgrown, decaying,  long forgotten driveway. Once we hit the bottom of the hill the blacktop disappeared, and Nidan veered left onto a rustic trail that took us over a small brook. Fortunately, there were large, flat rocks that I could use as a stepping stone, otherwise my journey would have ended less than ten minutes into our trek.

The state park we went to covers over 1,000 acres and has over six miles of trails through densely populated woods. The trails are marked by colors painted onto the trees, and were completely natural and rustic. What I assumed would be a brief foray into nature 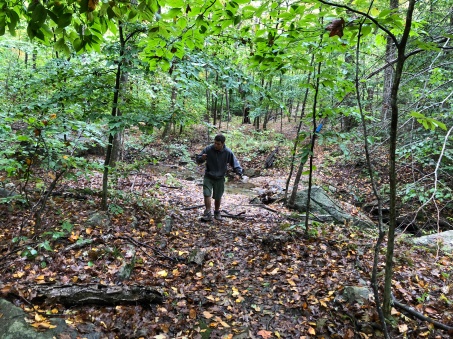 turned into a three hour adventure over trails that frequently had prodigious protruding roots, had a number of brooks that needed crossing, and were mostly heading in an uphill or downhill direction.

To make a long story short, I had a blast and surprised myself. We obviously were not burning up the trails as far as speed was concerned because my pace was slow and deliberate, but the fact that none of the trails slanted sideways made the route easier to navigate than my back yard.

I would take breaks from time to time, particularly when he came upon a parcel of ground that was densely populated with rocks. Nidan would carefully pluck or excavate them from the ground, and take them to the nearest brook so he could wash away the dirt, study them more closely, and decide whether they were keepers. When there were more items than he could carry, he’d find a place along the trail and lay them there, knowing that on the return trip he’d have a mental inventory of everything he unearthed, and could decide which ones to take home or leave at that time.

I obviously could not keep up with him, but Nidan always made sure never to stray so far we could not hear one another, his dismembered voice frequently drifting through trees saying “you doing okay Dad?”

After we were at it for while, and the afternoon shadows started making an appearance, I suggested it was time to leave, and he readily agreed.

The trek out of the woods was more taxing than the trip in, primarily because it was more downhill, which is harder for me, and because my leg was feeling fatigued by then. It was harder to negotiate those protruding roots, as the toe of my sneaker frequently got trapped in their clutches. I was in inchworm mode by then, so I never lost my balance. By the time we emerged, it felt wonderful to ease back into the comfy passenger seat. 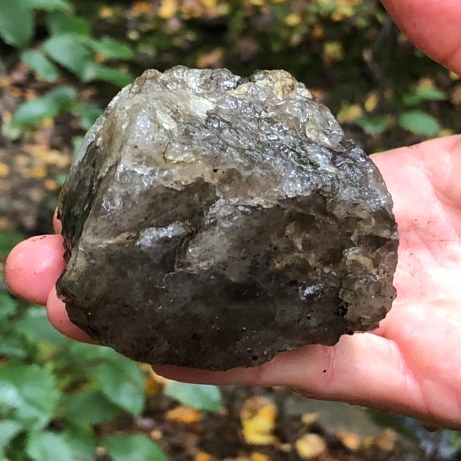 I learned a lot about myself that afternoon, First and foremost, it was wonderful to explore nature with my son and experience the outdoors in a manner I hadn’t in years. It was enlightening walking through the woods as peers rather than as father-son, and his attentiveness and concern to how I was doing was touching.

Secondly, I learned that I am not as physically inept as I assumed. We were on our feet for over three hours, traversed at least three miles of territory, and other than the weakness I ordinarily feel when I push myself, there wasn’t a single moment where I feared for my safety, nor was there a single time where I came close to falling or twisting my ankle. Maybe it was because I was paying very close attention to each step I took, but I was no worse for wear than I am after a rigorous workout on my recumbent bike. I certainly felt better compared this past winter during some of my snow removal experiences. Besides feeling good about myself, I emerged from the experience optimistic that maybe what I have been doing all these years to address the MS is actually working.

I also discovered that I’m not in bad shape physically. I wasn’t huffing or puffing during any point of the adventure. I couldn’t feel the drum of a pounding heart in my ears, and rigor mortis did not set in later than night once I settled down into the rocker-recliner. The only souvenir I had from the experience was a sore left triceps muscle, compliments of the walking stick I kept in that hand. I had leaned on that stick numerous times, and used different muscles than the ones I normally use leaning on a cane, but that discomfort was gone within twenty four hours.

Yes, I had moved and slowly and carefully during my walk in the woods, but the odd thing was I never felt disabled. I can’t remember the last time that happened. It gave me a different perspective on my abilities, and reinforced what I had long suspected, which is that while I have a disability and have physical limitations, I am better off than most, and am not anywhere close to becoming a couch potato unless I allow that to happen.

I can’t wait to do it again.