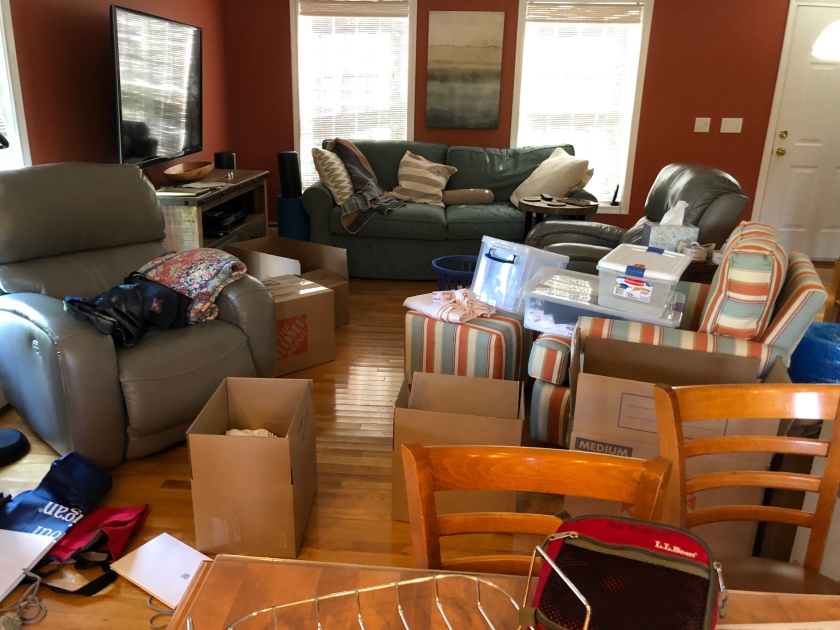 I have spent a lot of time in this space over the last year talking about the new house. In fact, when I wrote last week’s post , my intention was that it would be the final one on the subject until the moving trucks had come and gone. But there is another aspect to this ordeal I haven’t spent a lot of time venting about, and it is coming to a head.

If you remember, I mentioned last week how I hate feeling unsettled because I have flags planted in two different locations, but neither of them feel like home. The new place doesn’t feel like home for obvious reasons, we don’t live there yet. My current home of 19 years doesn’t feel like home because….well, all you have to do is look at the above picture to understand.

As you can see, there is shit all over the place. Moving boxes in various stages of completeness are strewn throughout the house. I have no idea how many boxes we (K and her Mom mostly) have actually packed, but I’m guessing it is getting close to one hundred. I  made a Staples trip last weekend to purchase more of them because we were running out, and when K told me we should get at least 30 I rolled my eyes thinking she was nuts. Well, we have maybe ten left less than a week later.

Clutter and disarray generally doesn’t bother me, which is probably a guy thing. K is fond of saying there could be a steaming pile of cow shit in the middle of our living room and I wouldn’t notice it. Not this time, however. First of all, it has been like this for a couple of weeks, so after that long even someone like me can’t not feel it. Secondly,  negotiating the suddenly limited floor space is like navigating a treacherous obstacle course for someone who has no balance, a drooping foot, and leg with no strength.

My role in this endeavor has been to carry the stuff out of the house and into the garage, but, as you can see from this pic, our garage is getting full.

The cars have been evicted from our garage for a month now, and there isn’t a lot of available space. Negotiating the garage is even more difficult than negotiating the house space, but at least we have a place for everything. Having said that, there isn’t much room left, and we’re at the point were I will soon have to start restacking the boxes to create more space. A number of boxes marked fragile exist, and we don’t store anything on top of those boxes to prevent anything from getting crushed or broken. So in order to create more space to accommodate the additional boxes I know are forthcoming, I’ll need to segregate the fragile stuff from the pack, and start stacking the other boxes higher. But not so high that they will become top-heavy and fall over. That would be a disaster!

Most of the painting is done, so our next step is to start the deep clean, which I love to do more than anything else (NOT!) That endeavor begins next week, primarily with the windows (there are a lot of them), and the floors, which need to be steam cleaned and waxed.

K is of the opinion that we need to get this house spic and span, and that the Home and Garden channel has made it harder to sell houses because buyers expect a lot more from prospective houses they want to buy, assume things should be a certain way, and have become very finicky and entitled. Guess we will find out if all this extra TLC will make a difference. I certainly hope it does. If we can get the price we want, they can be as finicky as they want.

We did this a lot in the late 1990’s (moving four times in five years), but we are far removed from that era. Although I thought I remembered what a tedious grind it was and is, this feels much harder. Perhaps that is because back then we were young, didn’t know any better, hadn’t accumulated nearly the amount of stuff we have now, and I didn’t have MS. As bad as the garage looks, it could be worse, as we have discarded or given away a bunch of stuff we no longer need and didn’t want to pack. That is one slice of wisdom learned from previous experience.

We are preparing to mobilize the troops to help us move the stuff in our garage in advance the movers coming in and taking all the big stuff. Compared to where we started, there is not a lot left to do, but there is still enough. Especially if we want to be out in three to four weeks. Then comes the task of removing everything we packed and placing them their new locations. While it will be wonderful to be in that position, this endeavor is almost as bad as getting the stuff packed. Plus we will have a ton of empty boxes to discard. On and on it goes. Will we be completely settled by Thanksgiving? Christmas?  I’d like to think the former, but who the hell knows?

Like I said last week, it can’t happen soon enough.

The finish line is close. I can see it clearly, as it is almost within our grasp. All that is left to do is install the floors, finish the trim around the doors and floors, install the appliances, hook everything up to the plumbing and electrical systems, finish painting, plant the grass, and lay the blacktop for the driveways. It sounds like a lot, but in the scheme of things this is short par putt. At least I’d like to think so.

I should be giddy, but the truth is I’m exhausted, more mentally than physically. In fact, I almost nodded off on the way home from work yesterday waiting for a long stop light.

I can’t speak for K, but I’d bet she’d tell you she is feeling the same way.

I am tired of being in limbo, with a foot in both places. Not only are we preparing the final touches on the new place, our current one is in compete disarray. The garage is half full with packed moving boxes and other items, and our living room has an assortment of boxes in various stages of being packed laying about. There is still cleaning and painting to do. The pace is relentless, and not feeling settled is, well, unsettling. I know the end is near, as I believe a late September/early October move is imminent, and that is part of the quandary. There is still so much to do in such a short period of time. It often feels overwhelming.

Each day is a blur. Wake up when it’s dark, go to work, come home and figure out what to eat (planning and preparing meals is more the exception than the rule), then head to the site and perform a myriad of little tasks to make things easier for the workmen and prevent unnecessary delays. One or both of us stay there until dark, then we come home, clean up, collapse for a few hours, drag ourselves to bed, and do it all over again the next day. By day’s end my mind is mush and my body is spent. I move around like a Walking Dead zombie. K’s body is sore from head to toe.

This weekend’s priority is to get everything off the floors of the new place, and trust me when I tell you there is a lot of big and little shit strewn about, much of which needs to be removed by tradesman, and get the floors cleaned, vacuumed, and otherwise prepared for the wood floors that will be put down next week.

It has literally become a seven day a week, eighteen hour a day gig, and has been this way for about a month now. You’d think the pounds would be melting from all the activity and the reduction in food intake, but you’d be wrong, so I don’t even have that perk to feel good about. The grind is relentless and tedious.

We are at the end of a what has been a grueling marathon, which is ending on an upward slope. The slope feels steep, but we need to muster a strong finishing kick. The task seems Herculean, but I know it will happen. What choice is there?

I know it will all be worth it. I know we will love the comforts and amenities of the new place, and I know that some day in the not so distant future we will look back at this with a nostalgic fondness. I also know this will all be over soon.

But it can’t happen soon enough.