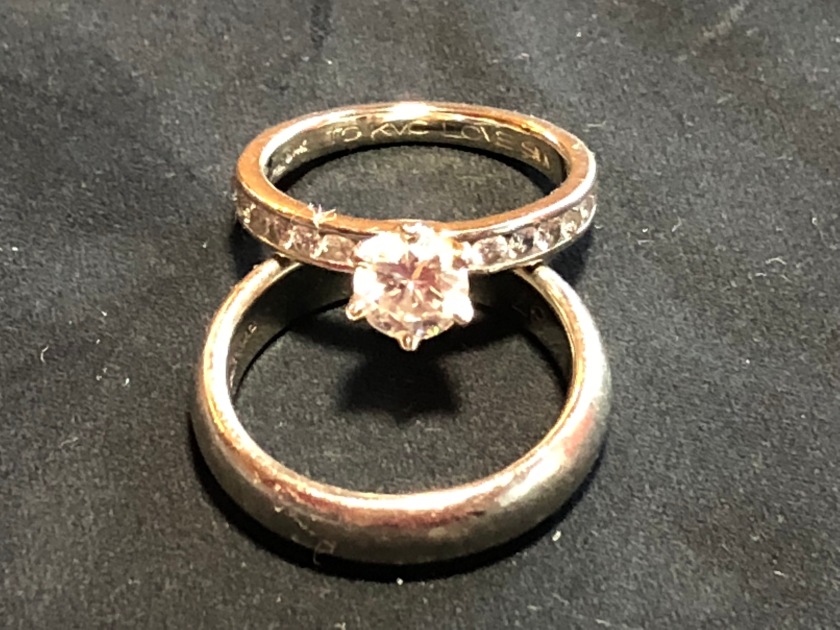 Steve has asked me to guest write for his blog. So here it is, from the spouse’s perspective. As I write this, we are spending the day at Yale Smilow Cancer Hospital, where Steve receives his infusions. Walking around this facility, it’s difficult not to be humbled. I found myself strolling behind a preteen girl riding a motorized wheelchair sporting a Make-a-Wish back pack. I ached for the young woman, perhaps in her early twenties, laboriously shuffling along with her walker, determined to make it to the infusion chair on her own, as well as the brave young boy, no more than eight years old, hooked to the apheresis apparatus.

Once the nurse found Steve’s vein on both arms, and the process began, I sat with him to chat. It’s a boring procedure, as he must stay awake while squeezing a rubber ball to facilitate blood flow. I’m not good with blood, but I’ve become accustomed to bearing witness to such things. I’m thankful that I wasn’t there for the visit where the machine malfunctioned, spilling blood all over the place.

Steve and I have been married thirty years, and during that time we’ve gone through many happy moments as well as more than enough difficult times, thank you very much. I am also well aware that we are blessed, and many people have been dealt an even tougher hand.

I often joke that one man is quite enough, but in reality, I believe that marriage is sacred. Marriage is tough, and many nuptials succumb to real-world pressures. As young couples, we bask in the joy of a wedding, never really thinking about the actual wording of those vows. Few of us realize the importance of “through good times and bad, in sickness and in health.” If you stay together long enough, none will escape the bad times, and rarely will a couple avoid the sickness part. It’s not easy.

In our case, I was the partner with the chronic ailments – migraines and stomach woes were part of the deal. Steve was supportive and steady, plodding through whatever came our way. While I had more endurance for pushing myself through exhaustion and icky days, Steve was hardier. He went about his day, living on little sleep (I can’t even argue about it anymore), and enjoying good health.

So, when he first described his initial symptoms, I urged him to see a doctor. And when the initial diagnosis came back as “tight hamstrings,” I said bullshit, and sent him to another. When he was formally diagnosed with MS, my initial feeling was shock. My friends acted like it was the end of the world, and yet, a part of me knew that Steve would take this on as he had everything, strong and steadfast, placing one foot in front of the other. Little did I know, that this would become a metaphor for his life, as he struggled to simply get around.

Having said that, my husband can be a pain-in-the-ass, and MS has made him even more so. He refuses to get enough sleep, he pushes himself when he shouldn’t, and he argues with me every time I urge him to pass on the heavy lifting to our son. “I can do it!” he’ll say. He reminds me of a stubborn toddler. I try to understand that it’s a matter of pride and independence, but really, we all have to let go of those twenty-year-old capabilities.

Speaking of arguing, my once easy-going, go-with-the-flow man, isn’t flowing anywhere. I swear what Steve has lost in physical ability he has gained in debating acuity. I say black he says white, my apple, his orange. You get the point.

After knee surgery, I hobbled around with a cane. My shoulder ached, my back felt out of whack, and I couldn’t imagine dealing with this, Every. Single. Day. It gave me a brief glimpse into what he must endure, dragging that leg around, and yet, try as I might to be patient, I sometimes find myself annoyed when he blocks me into a corner, or walks right in front of me, necessitating a quick pivot around him. All in the name of balance. Or his lack of it. Secretly, I think there are times he uses his MS, perhaps not even consciously. “Honey, why don’t you just throw the cat food can in the garage bin?” “I want to conserve my walking.” I don’t always understand how six more steps could make a difference, but then if every step is a feat of balance, and he’s tired on top of it, I suppose it does.

And then there is the worry and angst. Worry about his health, worry about my ability to take care of him and our family, worry that this horrible illness might break his spirit; and angst from watching him struggle. Sometimes it actually hurts to watch him walk up the stairs. Other days, I want to scream out loud when I see him schlepping around the yard, dragging a garden hose or carrying something cumbersome. Sometimes I do. “Let Shodan carry it,” I yell out the screen door. “I can do it myself,” the toddler screams back.

And then, when I find myself exhausted and frustrated, and even a bit pissed, taking care of the house, my mother, my son, meals, laundry, house maintenance, I try to remember to take a breath and count my blessings. Steve is still able to work, and this affords us a nice standard of living. His MS has progressed, but not as quickly as it could have and may still. When I find myself panicking about the future, I try to embrace his idea that whatever may come will come. Most important, I know that we are in this together.

If you enjoyed reading this essay, I would be most appreciative if you would Like and Follow my author page and pass the word!! https://www.facebook.com/kimmarkesichauthorpage/