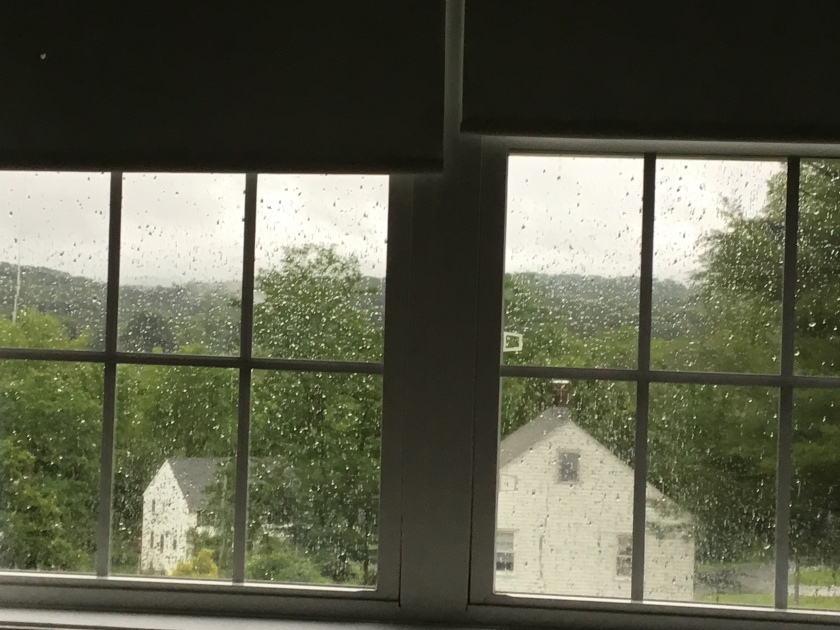 I had everything planned for this past weekend. Do some painting on the new house on Saturday, have a relaxing Father’s Day where I did very little as possible, take Monday off for my annual physical, do a few errands, then do some more work around the house site.

Well, the first part of that went according to plan, but when I woke up on Sunday, I had a raging sore throat and felt a little punky. I looked at my CPAP machine and discovered I had run out of water, which explained the sore throat, which went away after a cup of hot tea. But as K and I traveled to the cemetery to leave a Father’s Day plant on my Mom and Dad’s grave, a raspy cough settled in and my nose started burning. I figured it was a cold, and didn’t think too much of it because the last time I had a cold it was short lived, so I assumed this one would be too. Besides, it eliminated the temptation to do anything strenuous , and I was down for that because that doesn’t happen too often.

But when I woke up Monday morning I felt warm and sweaty, but attributed that to the cold. I ran two errands and delivered some stuff to the job site, but when I returned home, I felt really fatigued, but again figured it was a combination of the cold and the MS. Besides, I’d be seeing the doctor in a couple of hours and he’d assure me it was what I thought it was.

When they took my temp once I got into the exam room, the temp registered 100.8, and the doctor said my lungs, ears and sinuses were clear, that what I was dealing with was a virus, and that a lot of that was still going around. My instructions were to go home, drink a lot of fluids, take it easy, and let it run its course. So I went home, took a shower and hibernated in the spare bedroom, not wanting to share the joy. A few hours later I felt really hot, took my temp and looked at the digital display that read 102.3. Fuck!

So I took some aspirin, sweated like a pig for two hours, and felt infinitely better. The temp read 100.5 as I turned out the lights, and I figured that the worst was over. I’d stay home another day, lay low and be as good as new come dinner time. Unfortunately the thermometer was back up to 101 and change when I awoke in a sweat and has fluctuated been that and 102 all day. My nose burns but is clear, my cough is heavy, deep and dry, and my ribs are sore from the periodic coughing spasms.

All day long I haven’t ventured out of my room because I don’t want K to get this, since the house progress is more dependent on her than me, and am bored out of my fucking mind. Why else would I write something so mundane as describing this virus. It has been the most stimulating thing I have done all day.

The picture that started this post is what I have been staring at all day when I wasn’t watching Netflix. As you can see, it is cloudy, damp and dreary, which fits my mood perfectly. The frustrating thing is I don’t feel so sick where I can just sleep all day, but whenever I do anything I feel the heat rising.

Isn’t it interesting what you will watch on TV when you are so bored you want to scream? So far I have watched the documentary on Ted Bundy, who I knew nothing about (what a sick, evil fuck) some of the Ken Burns documentary on Vietnam Nam, and a documentary about Metallica that chronicled the band almost breaking up. Real cheerful stuff, I know, but like the weather, it fits my mood.

My MO is never to go to work when I am sick, and to let 24 hours pass when it comes to a fever. Based on that I am looking at another day isolated from everyone. It probably serves me right because one of the things I have been crowing about ever since I was diagnosed with MS, and that was 11 years ago, is that I rarely get sick anymore. I can count the number of times I have been sick on one hand. If memory serves me correctly, three days on the shelf will be the longest I have been down since then, and I have forgotten how much I hate being sick. I wouldn’t be in such a grumpy mood if this was going to be limited to one day. But I am looking at day 2 tomorrow, and I have no idea if there will be a day 3. If that happens, maybe I will suck on my vape pen all day long and let the MMJ mellow my angst. That will either kill me or cure me.

I have no idea how I will spend the day tomorrow, other than get up to pee every hour because I am pushing fluids. Maybe I will find something else to vent about. Meanwhile, thank you for indulging me. And send whatever positive vibes you can my way over the blogosphere.

I am really getting tired of this shit.