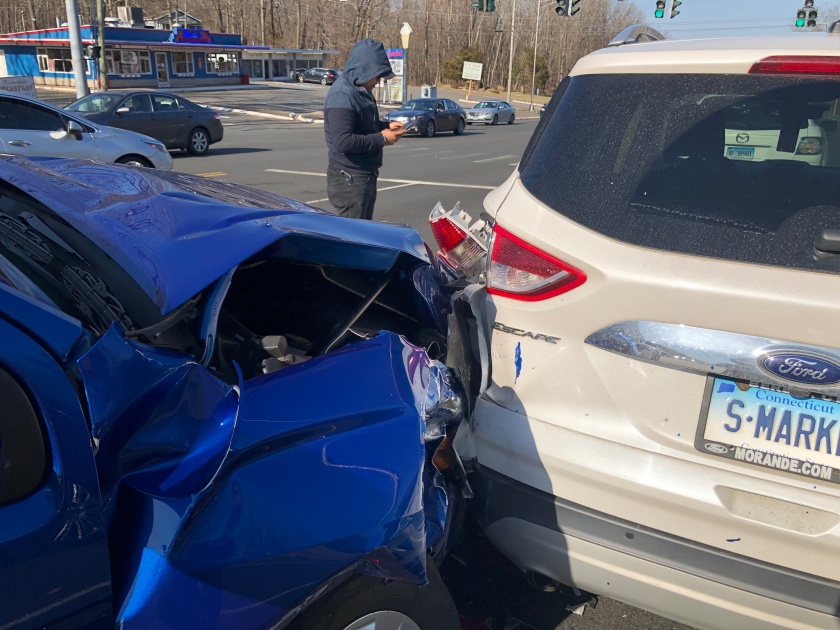 About month ago, while I was in the midst of writing the Waiting Room trilogy, I experienced something for the first time. It wasn’t a fun experience, but it was educational. The only thing I hope it had in common a bucket list item is that it was a once-in-a-lifetime experience.

I was involved in a automobile accident that involved five vehicles. Three of them, including mine, incurred heavy damage, one suffered moderate damage and one didn’t look to incur much damage at all. I am fine, and was fortunate enough not to have been injured in any way, shape or form. But when the shock of what transpired wore off that evening, and I had a chance to reflect on what actually  happened, it was clear that I was lucky.

I was returning home from work and had just pulled off the highway. There is a stretch of road that spans a couple of miles off the exit, where the speed limit winds down from 60 to 40 within that span. The last half mile of that section of road is on a downhill grade, with a four way stop light smack in the middle of it. There are four lanes at the stop light, the one on the left is for a left hand turn, the one on the right is for a right hand turn, and the two middle lanes are for those of us who are driving straight ahead. I was in one of those middle lanes, the one that was next to the left hand turn.

I was at a complete dead stop, and had been for around fifteen seconds or so. I don’t remember what I was doing, but think I was just looking around between glances at the light. I do remember being surrounded by vehicles, which is not uncommon for that intersection on the way home when the light is red. I was just chilling, not thinking about anything in particular, Then, without any warning, something violently slammed into my rear. The sound was loud, and the jolting impact was fierce. No airbags deployed, and the seatbelts did their job. Good thing too, otherwise my head would have hit the steering wheel, if not the windshield.

I wasn’t in any pain, and didn’t feel any panic. I was more dumfounded than anything else, not believing what had just happened. I remember two distinct thoughts. The first was “I’m okay.” The second was “This isn’t good.”

Stepping out of the car after calling 911, I saw the carnage. What looked like a fairly new blue GMC stuck was intimate with my back left quarter panel, which was destroyed. The door to the rear cargo area was visibly bent, the left back tire was punctured and the wheel well was shot. Glass, plastic and other car debris was everywhere. The right front of the offending truck was crumpled, and it was then that I noticed the other vehicles that were involved.

The right side of a Ford Transit that was behind me and to my left, was scraped and dented across both passenger doors, and its right side view mirror was sheared clean off, a solitary item sitting in the middle of the intersection about twenty feet ahead. A sedan, which was apparently behind me, had his right quarter panel caved in, but the vehicle was drivable, which I discovered when it was eventually moved out of the way to start letting traffic through. The car in front of me looked liked it was hardly scratched, but that probably wasn’t the case.

Everyone except the driver of the GMC that caused the accident was out their vehicles, milling about, checking to make sure everyone was okay, before the authorities arrived on the scene. After I walked to the back of my car so see what it looked like, I called the auto body shop that has done some prior work for us to let them know what happened and to get a wrecker on the scene, my insurance agent, then K.

This is what I had pieced together after inspecting the damage and talking with the cops and other drivers: the driver of the vehicle that caused the accident, a seventy year (or so) old gentlemen, apparently was driving down that stretch where the speed limit tapers from 60 to 40 with his mind on something else. He was in the lane for the left turn at the light when he looked up and noticed the light was red, a cluster of cars had stopped, and he hadn’t. Talk about an Oh Shit moment!

The Ford Transit was directly in front of him, so he swerved to his right in an attempt to avoid a direct hit, but sideswiped it instead, thus the pushed in right side and missing side view mirror. As he swerved, he hit the back left of the car behind me at a glancing angle, pushing it away, before plowing into me. The driver of the Transit said the GMC pushed my car ten to twenty feet forward into the car in front of me. I had left some space between me and that car, and didn’t notice any damage to my front end, but that didn’t turn out to be the case.

I don’t think the driver of the GMC had a chance to slam on his breaks because I didn’t hear any tires screaming before impact, and I didn’t see skid marks. I don’t know how fast he was going when he hit the first vehicle, but I’m guessing it had to be close to 40 MPH. Thank God he hit two other vehicles before landing on me, otherwise I think I would have had to accept the assistance of the emergency vehicles that arrived on the scene with law enforcement. I don’t think I would have had a choice.

When the wreckers arrived and they started clearing up the site, a good portion of the quarter panel fell off my vehicle when they separated my car from his truck, which made a loud clanking sound on the road. K was on the scene by then, suggesting that I go to the hospital and get checked out. I declined because I felt fine and didn’t feel like waiting in the ER all night long, but had to sign a document saying I refused treatment. As we were leaving the scene, I saw my Ford Escape sitting atop the wrecker and wondered how long it would take for the repairs.

I had an inkling getting it back wasn’t going to be an option the next day when I spoke to the owner of the auto body shop. I had called to see if the insurance adjuster had set up a time to inspect the damage, and the first words that came out of his mouth were “Man, you really got creamed. Are you okay?”

He also warned me that he thought the car would be totaled, explaining that happens if the cost of repairs exceeded 70% of the car’s value. He had a similar car with less miles and damage several weeks prior that barely came under that threshold. He proceeded to explain that not only would the quarter panel and rear door need to be replaced, but so would the front end, which was cracked from stem to stern and had damaged headlights. He also said this assessment was the result of a quick visual inspection. He hadn’t crawled underneath to see what goodies he found under there, but said he wouldn’t be surprised if he found something. The frame might have even been bent.

His assessment was confirmed within the week, so now I am without my car. I had a loaner for several weeks and pondered what to do because the last thing I can afford right now, with all the expenses of the house we are building piling up, is a car loan. The timing of this couldn’t have been worse from that perspective. I was discouraged because I really liked my Escape, and because it was fully paid for. My plan was to buy a good used car with the money I received from the insurance company but, no surprise here, I can’t get what I want with the check I received. And, I didn’t want to spend one dime more than they gave me.

I  hate hate hate car shopping, and am pissed with the entire situation. Fortunately, I have another car at my disposal, and we ultimately decided that I would drive my parents old 2004 Accord. It has low mileage and is in really good shape, so that will be my primary vehicle until we are in the new house and have sold our current one. At least then most of my loans will have been paid and I’ll have some liquidity to buy a new car. I wasn’t planning on having to consider a new vehicle for at least two or three years, having recently replaced K’s, but as the saying goes, life is what happens when you are busy making plans.

It weird what you think of in a situation like that. I remember being calm and proceeding in a matter-of fact manner. That might have been different if I was injured, but I instinctually knew what to do and who to call. I remember taking inventory of my body to make sure the reason I didn’t feel anything was because I was in shock. I hindsight, I regret not going to the driver of the GMC to see if he was alright. My lasting memory of the gentlemen, besides his age, is that he was a disabled veteran. I believe this because GMC had a custom paint job on the payload hitch that said “Freedom isn’t Free – Thank a Veteran”  and as he left the vehicle, he needed a cane to walk and had to be helped to whatever ride awaited him. I wish I had, and let him know I didn’t hold any grudges. For all I know, he did a hell of a job the limiting damage that could have been catastrophic once he saw what was about to happen.

I am curious about what this entire episode cost his insurance company. His truck looked brand new and sustained a lot of damage. Then there was my vehicle, the Ford Transit, the car he first hit, and whatever damage the car I hit sustained, if any. It would not surprise me if his insurance dropped him.

So my wheels are gone, I’m driving an old car, I have to take out a car loan for a new vehicle much sooner than I ever wanted to, and I have to dance the dance with car salesmen within the next several months. Swell! I miss my Escape, and am frustrated with an industry that gives you a check for the “market value” of your loss that doesn’t come close to the replacement cost of an identical vehicle.

But I really can’t complain. This could have turned out much worse.