The last couple of months have been a whirlwind on the building front. Plans have been drafted, tweaked and re-drawn at the eleventh hour. Details regarding the layout and elevation of the house, which I will get to shortly, were in a constant state of flux, and had to be put to bed before we could break ground. The mad scramble to identify and retain contractors was a daily grind, one that still has a few loose ends, but the truth is I have had little involvement with that. K is the general contractor on this project, you see, so she’s been the one pulling her hair out. I’m living vicariously through her, and never would have had the desire, nerve or knowledge to attempt this.

Building during the winter (technically, it is still Autumn – it has only felt like winter) is a race against the clock. We took on this challenge for a variety of reasons, but the main reasons were control and to save money. Serving as your own subcontractor allows for that, as winter tends to be a slower time for tradesmen, and there is less competition for their services. The other reason for building in the winter is we want to be able to move during the spring, which is the optimum time to sell out current home.

So the first order of business was to retain a builder who was experienced with building the type of energy efficient house we want, and who wouldn’t get their nose bent out of shape if they weren’t responsible for the entire building process. Their task is to get the foundation in, frame the house, install the windows and finish the roof. K would take it from there. Once the structure is up, it won’t matter what the weather or temperatures are because the house will be enclosed and the subs would be shielded from the elements.

Our self imposed deadline, based on an assumption that the ground would not be completely frozen until then, was Christmas. Until recently, getting to the point where we could meet this deadline was like trying to nail Jello to a wall. All the last minute changes were bad enough, but K was like a dog with a bone and managed to pull everything together in early November. Unfortunately, Mother Nature wasn’t on the same page.

This has been a miserable Autumn, and the last few weeks have been especially terrible. While the folks in California would have given anything for a few drops of rain to stem the tide of the terrible wildfires, we were facing the opposite conundrum. Connecticut was in the midst of a stormy weather pattern that brought frequent rain, some of it torrential, and an early snowstorm. Not only that, the temperatures have been much colder than average, all of which have conspired to create numerous delays and postponements.

Talk about frustrating! It’s such a helpless feeling knowing that the clock is ticking, the amount of time in which to accomplish your goal was quickly eroding, and that all the time and effort spent in getting this out of the ground was in jeopardy of being derailed until Spring.

The last minute changes certainly didn’t help, but were an economic necessity. To make a long story short, we purchased adjoining lots, with the idea that when Nidan started working and eventually built up his savings, he’d have a lot to build his own place.  Our original plan was to have a separate apartment attached to the main house where he and my mother-in-law, who lives with us, would reside. When informed about the prevailing price per square foot for new home construction, and the fact that additional corners to any structure really jack up the construction price,  the math suggested that if we built a small house on the adjoining lot instead of an attached apartment, the cost would not be much greater. We therefore had blueprints for two houses drafted, and were ready to roll with that. After all, who wouldn’t want to empty the nest as early as possible?

Those plans unraveled once the quotes started coming in, and it became obvious that we would be way, way, WAY over budget, which was a shock based on what we thought we knew. The two house plan went up in smoke, so we had to scramble, and have the plans re-drawn (ka-ching!) that converted most of the basement of the original house into an apartment with a separate entrance.

This development changed the footprint of the entire house. In order to get the water and sewer lines into the downstairs living space, the house had to be raised several feet. This made the driveway, which was already a lot longer than we wanted so it would wrap around to the back of the structure where their entrance would be (ka-ching!), steeper than we would have liked. It also created a handful of other building complications that I won’t get into, but the bottom line is it delayed the entire process at least three to four weeks. Naturally, the weather nice during this unexpected delay, and would have provided a sustained period to get us out of the ground. It wasn’t until we were ready to rock and roll that the weather descended upon us like a ton of bricks.

When ground finally was broken, it was so saturated that extra material had to be utilized to prevent the heavy equipment from sinking (ka-ching!), and more drains were installed to help direct the water away from the building site (ka-ching!). The cherry on top occurred a couple of weeks ago where, after the hole was finally dug and ready for the foundation forms, over an inch of rain fell on already saturated grounds. This caused the earthen walls to collapse, which required the excavator to spend an extra day clearing the mud that sat where the foundation forms needed to be  set up (ka-ching!). The coup de grace was having to employ a truck that pumped the concrete from the mixer to the forms (ka-ching!)

Happily, all of that is past us. The footings were poured last week, and the foundation was poured on Monday. It appears we will be blessed with a ten day period of primarily dry weather, but this stretch will also be exceeding cold. What does that mean? It means the concrete needs to be kept warm, which requires an extra step or two in the process (ka-ching!).

The pictures that follow represent each step of the process to date, starting from the time we initially purchased the property. 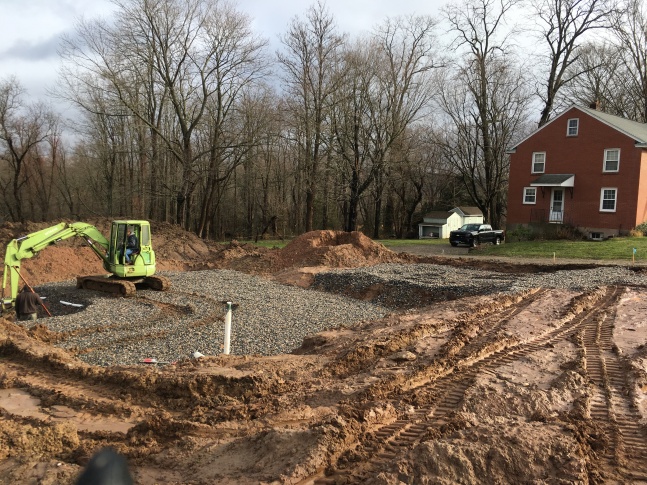 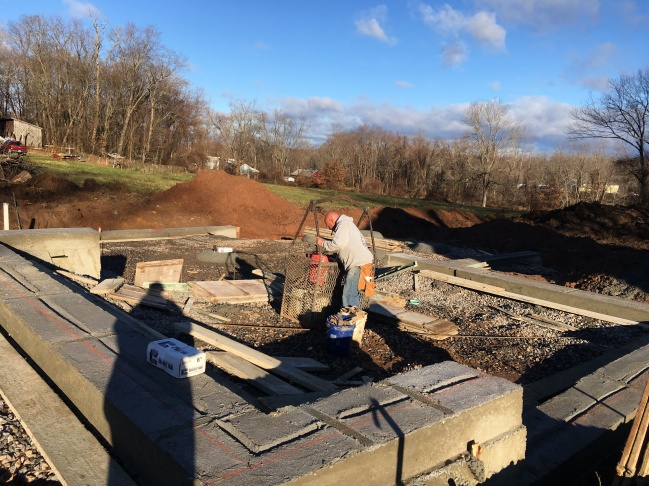 This period of dry weather should provide enough time to get the floors poured before we reach the point of no return, so the pressure to get things moving isn’t as great as it was several weeks ago. Still, it will be a relief once the lumber and windows are ordered because that will mean the floor is poured, the construction can begin in earnest, and we are back on schedule.

Wouldn’t that be something?

20 thoughts on “A Foundation To Build From”